Where is the Best Pizza in the World? | My Late Deals
2 Adults 0 Childs
Adults
Children
of ages
Done 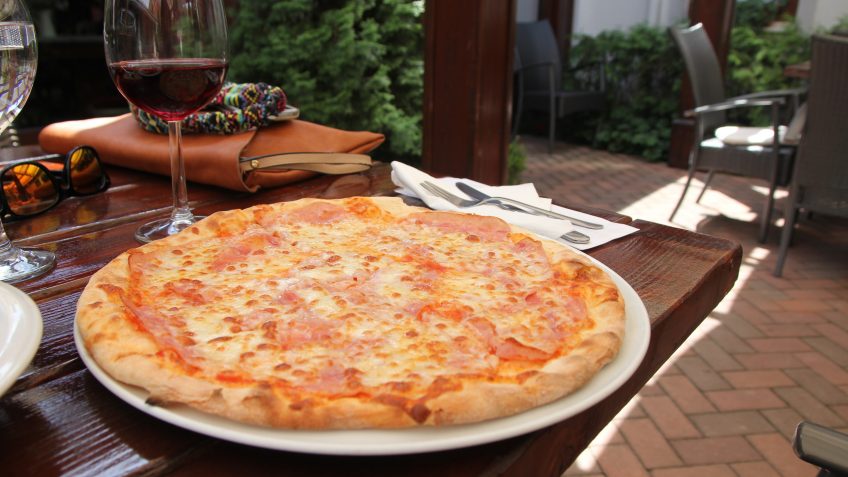 Where Can You Eat the Best Pizza in the World?

Think you already know where to find the world’s best pizza? Check out our late holiday deals for discounts on flights and your hotel.

UNESCO has declared the art of making pizza an Intangible Cultural Heritage of Humanity. Whatever you might think of that, pizza is certainly one of the (if not THE) most widely appealing foods in the world. Whether you’re eating it with your hands or cutlery, grabbing a takeaway with friends or heading to a fancy restaurant on a nervous first date, everyone can find a pizza they enjoy. There are countless local pizzerias out there claiming they make the best pizza in the world, but, like Highlander, there can be only one! A favourite pizza is a matter of subjective taste, but to help you narrow down your search, here are some of the most award-winning and celebrated pizzerias and pizza makers (pizzaiolos) from around the globe.

Fiamme Pizza is an authentic pizzeria in Tucson, Arizona, that prides itself on making delicious pizzas using Italian-sourced ingredients and a classic wood-fire oven. But you don’t want to visit this pie-making parlour just for its delicious slices. Founder Scott Volpe is one of the world’s best culinary acrobats and first place winner for freestyle pizza acrobats at the Pizza World Championship.

If you like dinner with a show, there is no finer establishment for the best pizza in the world.

Find a late deal in the USA.

Dubai has a well-deserved reputation of offering the biggest and the best of everything. From the world’s tallest building to the fastest police car service (their fleet includes a Bugatti Veyron). While it might lack the best pizza in the world, Rossovivo is a serious contender. This metropolitan city has a healthy population of Italians and a healthy number praise the Rossovivo pizzas for their authentic taste.

It may not be the best pizza in the world, but Rossovivo is the winner of the Trofeo Caputo award, meaning it is the best Italian in the UAE.

When it comes to the best home-cooked, family-style, organic pizza, look no further than Bӕst. The pizzeria is attached to a farm which produces its own mozzarella from milk sourced from their own cows. They also buy all meat and flour locally.

In fact, only one thing is imported: their custom-built woodfire oven, made in the home of pizza…Naples!

Asia is probably the continent least celebrated for its pizzas, but a fancy bar-lounge-restaurant in the heart of Hong Kong may be about to change that. Kytaly also happens to be a pizzeria, and its award-winning pizzaiolo, Franco Pepe, has helped craft pizzas which have been voted the best in the world by two renowned pizza experts: Where To Eat Pizza; and 50 Top Pizza.

Thomas Schneider, owner and operator or Winnipeg’s Timmy Tom’s Pizzeria, took home the World Pizza Championship title of Canada’s Best Pizza Maker after only his third time competing in a pizza-making competition. If you like interesting and creative combinations of cheese on your menu, head to his pizzeria in Canada for the ultimate pizza!

400 has won both a best-pizza-in-the-world award and pizza in Australia. More recently, Naples-based pizza prize Top 50 Pizza Gala awarded them the title of Best Pizza in Oceania.

The pizzeria hails from Melbourne, but you don’t have to limit yourself to Australia to taste their amazing pizzas. Owner Johnny Di Francesco has expanded to the Middle East, has a partnership with P&O Cruises, and intent to open pizzerias in New Zealand and the USA.

In 2019, for the first time in the competition’s 18-year history, a woman, Teresa Iorio, won the coveted prize for best pizza maker in the traditional Neapolitan style.

And, as you’d expect, Teresa runs her own restaurant, in Naples no less, alongside her all-female staff, using recipes and techniques that have been in her family of pizzaiolos for generations. Pizza doesn’t get more traditional and authentic than this!

Find a late deal in Italy.

However, the prize for best Neapolitan Margherita is a contentious one, with another distinguished Italian pizza award, the Caputo Trophy, selecting the Antonio Mezzero Pizzeria as the best maker in the world. The pizzeria is based in the beautiful city of Porto, in a district called Matosinhos, and while Antonio is clearly extremely talented when it comes to making the simplest pizza in the world, he is a local favourite for his gastronomic creations.

Find a late deal in Portugal.

In a competition featuring hundreds of competitors who supply their own ingredients, judged by a diverse panel of chefs and food critics, Umberto Fornito of Antica Pizzeria Frattese in Frattamaggiore, Italy, won the title of International Pizza Challenge: World Champion Pizza Maker of the Year. The pizzeria is highly rated with a huge selection of delicious pizzas.

The surprise winner of the 2019 World Pizza Championships Classic Pizza Maker doesn’t only go to a UK-based pizzeria; it also happens to have won with an entirely vegan entry!

Purezza’s pizza, which they called, The Promised Land, is an IPA-infused (you read that right), wholegrain dough made with two types of vegan cheese, stir-fried cavolo nero, mushrooms, marinated tempeh, and bean sauce.

Purezza have pizzerias in Brighton and Camden; so, book your table at your nearest Purezza and take a bite out of the best pizza in the world.

Feeling peckish for some delicious international food? Book your next holiday abroad by browsing our late holiday deals, then judge the best pizzas in the world for yourself.