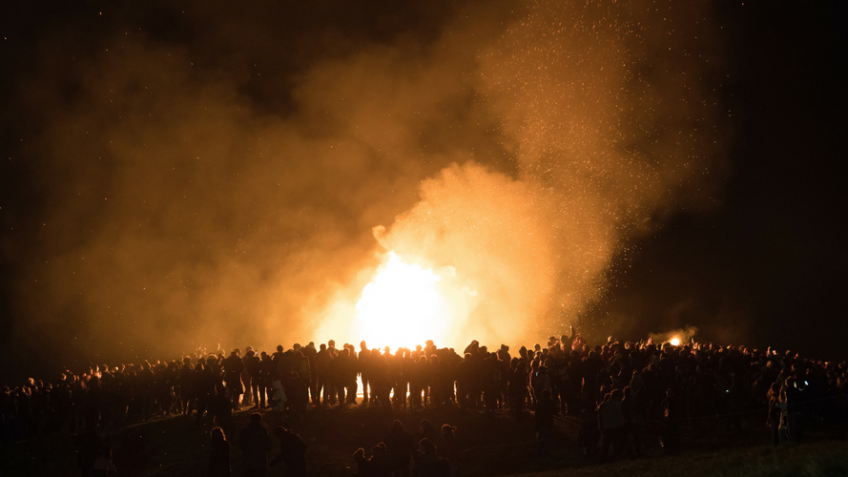 Top European destinations to countdown to New Year’s Eve in 10, 9…

You don’t need to travel far to experience something new on New Year’s Eve. Here’s our round-up of alternative celebrations in our home continent, from plate smashing in Denmark, to running down the street in your red undies in Valencia, Spain. Yes, really…

10… Make it a beach chair affair on Rügen Island, Germany The locals of this beautiful German island have the right idea, preferring to see in the new year from the comfort of a wicker beach chair. Find a spot on the beach to watch fireworks over the sea, with a warm cup of something boozy.
Fly to: Heringsdorf Airport

9… Run through town in your red undies in Valencia, Spain It’s custom in Spain to buy a new pair of red underwear for NYE, said to bring luck and vigour for the new year. The residents of La Font de la Figuera in Valencia take it one step further, and race through town wearing ONLY their red panties when the clock strikes midnight.

Join them. It’s safer than running with the bulls… Fireworks are illegal for most of the year in Iceland, but around New Year, the ban is lifted for all, and the skies are filled. It’s customary to visit one of the 10 bonfires in the capital city, lighting time is 8.30pm. The tradition of bonfires dates back to local fisherman in the Middle Ages, who would clean their house of the old, and burn everything in a big fire to make way for the new.

LOCAL TIP: The best place to watch the fireworks fill the sky is from Öskjuhlíð Hill, where you can see almost the whole of Reykjavík and the neighbouring towns.

Stay at: for the best location besides Reykjavic’s Cathedral and Icelandic parliment, stay at the Hotel Borg If you ever needed an excuse to overeat this festive season, this is it. Estonian tradition dictates that the number of meals you eat on New Year’s Eve means that you’ll have the strength of that many men to face the year ahead. But it can’t be just any number, their lucky numbers are 7, 9 and 12, so book a restaurant in the beautiful cobbled capital Tallinn, by the breeze of the Baltic Sea, and get comfy. (You’re supposed to leave a little bit on each plate to please the ancestors, so that might help you out.)

Stay at: The Telegraaf Hotel, just 1 minute’s walk from the main square in Old Town

6… Be a loon in Edinburgh Get to Edinburgh one day early for the start of their 3-day Hogmanay celebrations. The first night is unmissable, an atmospheric viking torchlight procession through the streets of Edinburgh, attended by tens of thousands each year.  Continue revelling through to New Year’s Day, when you can join hundreds of loons [people] in fancy dress for a ‘refreshing’ dive into the freezing cold water of Firth of Forth.

Stay at: The Principal Edinburgh George Street ****, Edinburgh’s oldest hotel, from £91 per night

5… Smash plates for a smashing time in Copenhagen, Denmark With their reputation as innovators in global gastronomy, you’re guaranteed a good meal. To top the night off, you’ll witness a truly unique experience. The locals save up their cracked crockery throughout the year with the sole purpose of smashing them against their friends and family’s front doors on NYE; a sign of luck, the more mess you have to clean in the morning, the more popular you feel.

Stay at: Hotel SP34 in the lively Latin Quarter, prices start at £111 per night Trust the most amorous city in the world to welcome the New Year with a communal kiss. Prepare to pucker up at the public celebrations in Saint Mark’s Square; after kissing lovers, the Venetians will be kissing friends and strangers, welcoming the new year with love and peace. Followed by a Prosecco toast. What’s not to love?

Stay at: The Novecento Boutique Hotel, a stone’s throw from Saint Mark’s Square, tucked in a quiet alley for a peaceful sleep. Prices start at £99 per night The Eiffel Tower, the Champs-Élysées, Moulin Rouge. Do you need another excuse? Jump on the Eurostar, walk the city streets, feel good. You don’t even need to book a hotel, pull an all-nighter and get schedule your return for the morning after.

Stay at: Hotel Crayon Rouge, a retro chic affair in downtown Paris, complete with it’s own wine bar. Prices start at £115 per night. Tornio in Finland, and Haparanda in Sweden are separated only by the River Torne, a short walk will take you from one to the other. Crossing the bridge not only takes you into a new country, but into a new time zone. Countdown in Tornio, then hop over to Haparanda, wind back the clocks and do it all again an hour later.

Fly to: Kemi-Tornio Airport (Finland) – there is a connecting bus service if you want to base yourself in Swedish Haparanda

Stay at: Hotel Mustaparta, conveniently close to the river border between Finland and Sweden for all the NYE action. Prices start at £105 per night, including breakfast. In Vienna’s old city centre, the streets are portioned off into different party zones for New Year’s Eve. The Graben Quarter transforms into an open-air ballroom where the city’s dance schools offer free crash courses in the Waltz. Pack your best dancing shoes.

Stay at: Grätzl Hotel – their designer suites are renovated spaces in old retail units around the city, choose from ‘The Tobacconist’, ‘The Confectioner’, and ‘The Button-maker’ to name a few. Prices start at £106 per night.